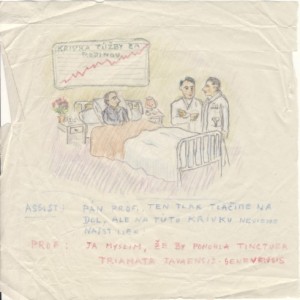 One thing I really admire about Pavel Fabry, is how affectionate he was in the letters he wrote to his family. Here is a little sketch of Pavel’s, with him in a hospital bed, a graph behind him that says in Slovak “Curve of Longing For Family”. The doctors are saying they have no cure for this “curve”, and Professor Fabry says he thinks a “Javaensis-Genevensis” tincture is what he needs. This was likely drawn during the late 40’s – early 50’s – when Vlado was working for Independence in Indonesia, Olinka and Maminka were refugees in Switzerland, and Pavel was in a hospital recovering from torture in a concentration camp, in the now former Czechoslovakia. Pavel’s sense of humor here shows he was living life on his terms, that he followed his convictions, and that he was willing to endure suffering for a just cause – a true romantic.

Then there are times when I am a little annoyed with him, like with this undated letter, sent to Vlado around the time he was working on the Suez Canal Clearance project in 1957, most likely before the project was finished. Pavel is telling him that he has to lose weight in two weeks, before their family vacation together (which would end with Vlado coming down with Hepatitis, and the weight loss that came with his illness). Then he says with all the tempting food of the Norwegians, Swedes, Canadians and Indians in the desert, that he would have to ride a horse at full gallop all day just to keep fit. He gives Vlado the advice to fall in love to lose weight, but not too happily, so he doesn’t fall apart at the end of it. Really, as if Vlado didn’t have enough to worry about, he has his father telling him he is too fat and needs to go on a diet! He is right though, that falling in love is great for weight loss, but he must have thought Vlado had some kind of superpowers to find a girl to fall in love with on the spot!

If Vlado was a romantic, it was because Pavel set quite an example for him. Romance was never far from Pavel’s mind, as can be seen in this little boudoir sketch (click to enlarge): 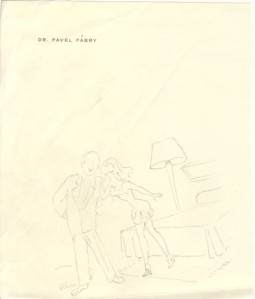 What is she whispering in his ear, I wonder?

Sometimes, thoughts of love and food were in competition, like in his surreal sketch of a fish woman: 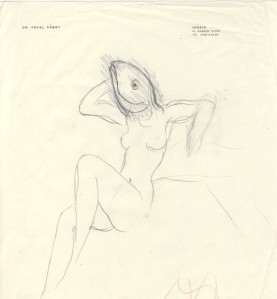 Keeping to the subject of romance, in another post, we read the love letters of Vlado and Mary Liz, with the last letter written in September 1957. There are no more love letters written by Vlado after that, but I found a portion of a Mr. America magazine, from January 1958, with a cover banner that reads “USE YOUR SEX URGE FOR BUILDING A HANDSOME BODY”: 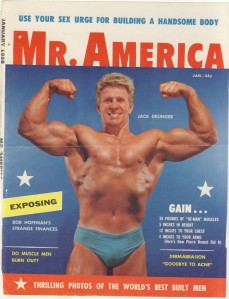 Who knows if Vlado was trying to control his “urge”, or what, but romance may have been distracting him from larger goals in his life. I think Pavel was not much different than Maminka, in that he wanted Vlado to find a nice girl to marry – but I also think he took vicarious pleasure in hearing about Vlado’s carefree romantic life as a bachelor.

Vlado left some heart-sick women in his wake, as is shown in this last letter from 1959, written by a woman who wasn’t over Vlado at all, and whose impending marriage brought to mind funerals and drowning. This letter is more a distress call than anything else, which makes it a very funny read!

Now it looks as if I may be in NY at last, but for the most unexpected of reasons – on a honeymoon! Probably, April 12-25.

I’ve been so interested to notice in how many ways marriage is like death! First, probably the only reason so barbarous a rite as a wedding has lasted so long in our streamlined society is probably the same reason the funeral has – i.e. sociologists say that all the transactions involved in planning a funeral take the bereaved’s mind out of the depths & the same goes for the bride, bereaved of her freedom!

Marrying is also like drowning in that you suddenly relive your past – at least your past loves & all my former boyfriends have come parading their images across my minds eye – & I must say, Vlado, that as I go through my card file, choosing addresses to send announcements to, each card brings up a little doubt, but the most difficult card to process was yours! Isn’t that funny, because I had dated other boys a lot more than you & I was just as inflamed over them.

It’s just that when I think of me settling down to air force protocol (he’s in for 10 more years!) I think of your verve; & when I think of those forever churning conversation on the base about TDY’s, PFR’s, ER reports etc., I dream of the day you, Otto & I went to the woods and captured those flagstones in such a unique way!

When I ask my 3 F’s (friends, family, fiance) what they would think of my sort of going to NY to get my trousseau & choose my silver pattern & all, they retort “and get that Czech at the U.N. out of your system? You’d never come back.” I shall always wonder if I couldn’t have made you come crawling & writhing out of your shell (if there’d been time) like a tortoise does when the Indians tie him above the fire so he will squirm into the soup pot! But my fiance says I’d better marry him without travelling to NY, because regrets are better than despair….

This stationary is a memento from our bi-family conclave to plan the bash (it will be April 11 at the ——City Community Christian Church – I dare you to come & stand up when the preacher asks “If there be anyone who denies that they should be married…”). His family is from Texarkana, long time friends of my folks, but we conclaved on neutral ground – in Fayetteville!

I do hope some sort of wife won’t open this letter, although I’m sure she would be understanding; otherwise she couldn’t have married you! But just in case I wish there was something I could say which would make me sure you’d know who sent the letter, so I wouldn’t have to sign my name, but I have a strong suspicion that you’ve taken many a girl hiking in the rain, driven her to help her pack on Bank Street – & even many admirers have sent you wooden pigs & sustenance pills when you were in Africa! So I’ll just have to say,