In memory of the 16 who died in Ndola, here is some of the collection from my mother-in-law, Olga Fabry, who carefully saved all the documents and mementos I share here. Vlado was only 40 years old when he died, a man who was very much loved by his family and friends, and my thoughts are with all the relatives around the world who remember their family on this day. The struggle against racism and white supremacy continues for us, let us not forget their example of courage to resist, and to fight for justice.

Program from the first wreath laying ceremony at UN Headquarters, one year after the crash, 17 September 1962: 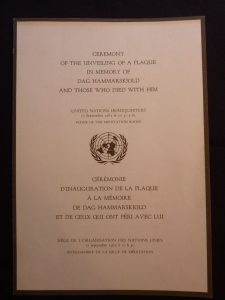 Invitation from Acting Secretary-General, U Thant, to Madame Fabry:

Letter and commemorative UN stamps from U Thant to Olga Fabry: 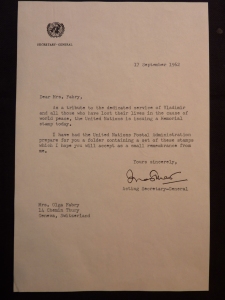 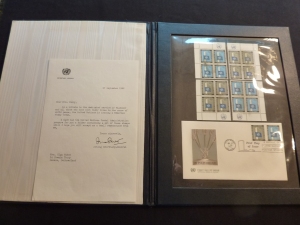 Signatures from UN staff were collected from all over the world to fill this two-volume set of books in memory of Vladimir Fabry:

Signatures from UN Headquarters in New York include Ralph Bunche, and his wife Ruth:

Signatures from Geneva Headquarters and a message from John A. Olver:

Telegrams from friends in every country:

Among them, a message of sympathy from the King of Sweden relayed through Ralph Bunche:

And a cable from Jozef Lettrich:

UN cables express the loss of a dear friend and highly valued colleague: 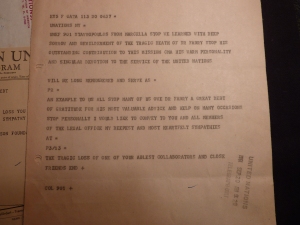 Newspaper clippings from 1961 and 1962, the first one with a photo of Olga Fabry and her mother at the funeral in Geneva, Switzerland:

The investigation will coming up for review in the General Assembly, and for those who think we should give up and be quiet about it already after all these years, Dag Hammarskjold said it best: “Never, “for the sake of peace and quiet,” deny your own experience or convictions.”