From the estate of Vladimir Fabry, here are a few items of interest. First, the “Notice of Death” from Ndola, Northern Rhodesia:
(click images to enlarge)

The post mortem of Vlado says his body was badly burned, and that he was identified by a monogrammed signet ring, so it was surprising to find this letter, and to learn I was in possession of at least one artifact from the crash:

Memorandum re contents of a sealed package delivered by Geneva Headquarters of United Nations to Miss Olga I. Fabry on October , 1961.

The box was tied with brown cord and the cord sealed with a metal U.N. seal. Attached to the box was an envelope from the United Nations Organization in the Congo marked “Urgent, Confidential”, addressed to Mr. John Olver of the the European office of the United Nations in Geneva. The envelope was marked “If Mr. Olver is absent, to be opened by Mr. A. Marx, Chief of Personnel.”

On opening the envelope it was found to contain a letter marked “Confidential”, dated September 29, 1961 addressed to Mr. Olver and signed by Mr. B. Grunzweig. The letter concerned the estate of the late Dr. Vladimir Fabry and stated that the writer understood that the package contained partially destroyed or burned money, travellers’ checks and notebooks belonging to Dr. Fabry. It was requested that the package be delivered to Dr. Fabry’s family, since it might be possible to recover some of the money contained therein. A copy of the letter is attached hereto.

On breaking the seal and opening the package, it was found to contain an envelope in which the following documents and currency were enclosed, all party burned and in the case of some of the currency, badly burned and difficult to decipher. The badly burned currency was in a separate envelope. On the top of the package of burned currency there appeared to be a partially burned folded bill on which the letters “llars” appeared. From what could be seen of the bill, it appeared to be U.S. currency, the denomination unknown. The bills in this package are compacted and stuck together, and they are badly burned. For that reason no attempt was made to separate these bills in order that the same in their present condition might be presented to the proper U.S. officials for examination.

The other contents of the envelope are the following:

Though I have looked, I have found no sign of the burned notebooks. Here is all that remains from the crash, from the last moments of Vlado’s life, one St. Bernard’s medal, which I now carry as my own good luck charm: 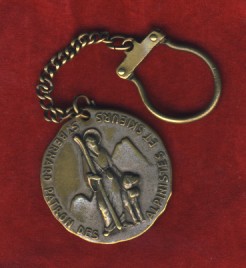 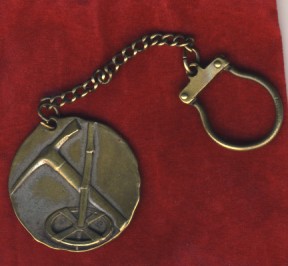