On November 4, 1959, while Vlado was working in Beirut as Legal and Political Adviser to the UNEF in the Middle East, there was a fight between four Egyptian and six Israeli jets at the border of the two countries. Here is a letter from Vlado’s father, Pavel, written the following day, which has a news clipping in German referencing this event. I can’t properly translate the Slovak, but it shows Pavel’s usual sense of humor, in the format of a mock newspaper front page – especially the magazine image he altered to look like Vlado, with his nose in a book at the beach, surrounded by women trying to get his attention, ha! He was so funny. I’ve included a couple photos of Pavel, showing what he looked like around this time. 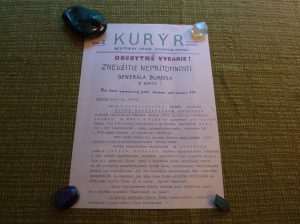 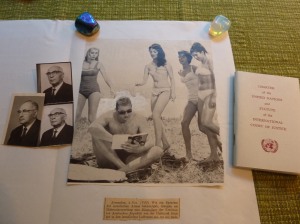