Time for a performance review! A couple of United Nations periodic reports for Vlado that I found, which give a little more detail into the work he was doing from the period of September 1951 to 15 June 1953, and from the period of June 1953 to April 1955. This first document quotes the Secretary of the Committee on Restrictive Business Practices: “His competence, accuracy and industry in the production of legal research was outstanding. He put in a backbreaking amount of overtime, and displayed good judgement, understanding and tact on all his assignments.” 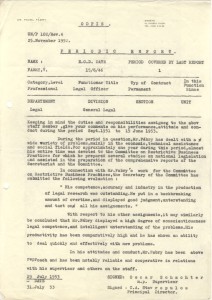 This second document, dated 12-4-55, is what made me believe Vlado was one of the “lawyers deeply versed in international law”, mentioned in Roger Lipsey’s biography HAMMARSKJOLD: A LIFE (chap.10, para.4); who were working long hours through the night to add the provision to Article 98 “…and shall perform such other functions as are entrusted to him by these organs” – the provision gave Hammarskjold the entitlement to negotiate directly with Chinese officials in Peking, in January 1955, to release 17 American fliers that were being held for investigation.

I had wondered why I had a copy of Article 98 (in a previous post) that was labelled “First Draft” with the initials “VF/sf”, when that Article was originally adopted on 25 June 1945. While the mention of Vlado’s “application of Article 98 of the Charter” in this document still doesn’t confirm if my belief is correct, it does seems to point in that direction – that he was involved in another important event in the history of the United Nations.

“During the period in question Mr. Fabry has performed his duties in a most satisfactory manner, and has continued to justify the favourable comments made in his previous periodic report.

His work during this period has extended to a wide variety of questions covering such areas as technical assistance, restrictive business practices, UNWRA problems and financial questions. He has also dealt competently with a number of difficult problems of international law. In addition to handling current legal questions in the above named fields, he has prepared or assisted in the preparation of several comprehensive legal studies, as for example, in respect of the Jordan Valley Project, the organization of the proposed atomic energy agency, analysis of South African law, and the application of Article 98 of the Charter.

In all of his assignments Mr. Fabry’s work has been thorough and reliable, revealing mature judgement and a well-considered approach to both the legal and policy issues. The legal experience which he has acquired in the last three years as well as his previous work with the Indonesian Mission have enabled him to assume assignments of increasing difficulty and responsibility, and he can now be regarded as one of the most useful legal officers in the Division.

His attitude and conduct have been above reproach, and his relations with others both within the Department and outside have been entirely satisfactory.

Mr. Fabry has proved to be a valuable member of the Office of Legal Affairs.

“His attitude and conduct have been above reproach” – who wouldn’t save reviews like this!