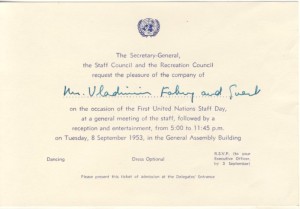 Vlado’s invitation, from the personal collection

If anyone deserved a special day of recognition, it was the UN staff of 1953, who had been slandered by the U.S. federal grand jury on 2 December 1952, saying that there was “infiltration into the U.N. of an overwhelmingly large group of disloyal U.S. citizens”. Secretary-General Trygve Lie gave the FBI carte blanche of New York Headquarters “for the convenience” – and this was after he gave his resignation, on 10 November 1952; which he gave under pressure of McCarthyism, and the Soviet Union’s refusal (for years) to recognize him as Secretary-General because of his involvement in Korea. Hammarskjold was sworn in on 10 April 1953, and he did all he could to defend and support his UN staff, and managed to get the FBI removed from UN Headquarters by November 1953.

With appreciation to the author, here are excerpts from chapter 3 of Brian Urquhart’s biography of Hammarskjold:

“On January 9 [1953], President Truman, by Executive Order 10422, introduced a procedure by which the U.S. government would provide the Secretary-General with information on U.S. candidates for employment and would empower the U.S. Civil Service Commission to investigate the loyalty of Americans already employed by the UN. In the same month, the Eisenhower administration’s new representative to the UN, Henry Cabot Lodge, Jr., as one of his first official acts asked the Federal Bureau of Investigation (FBI) to investigate all members of the U.S. mission to the UN as well as U.S. members of the Secretariat itself. For the latter purpose Lie permitted the FBI to operate in the UN Building, for the convenience, as he explained it, of the large number of Secretariat officials who would have to be interrogated and fingerprinted. To the Secretariat, the presence of the FBI in the “extraterritorial” Headquarters Building symbolized yet another capitulation to the witch-hunters.”

“Another problem inherited from Lie was the presence of the FBI in the UN Building. The extent of that agency’s activities was revealed on June 20 during an incident in the public gallery of the Security Council, when an American agent in plain clothes attempted to take a demonstrator away from the UN guards. Hammarskjold demanded a full investigation of this incident and protested vigorously to the U.S. mission. He had also learned of the case of a senior official who had been given a detailed questionnaire on his relations with various people and his views on Communism. The fact that the official had felt obliged to reply raised in Hammarskjold’s mind a serious question of principle. Did a government have the right to question a respected official of the UN with a long and good record of service on the basis solely of suspicion and rumor? Surely the proper course was for the government concerned to tell the Secretary-General of its suspicions, leaving it to him alone to decide what action, if any, should be taken and what questions should be put to the official concerned. He therefore instructed the members of the Secretariat that until he could get the FBI off the premises their reaction to inquiries about their colleagues could in no circumstances go beyond the duty of everyone to help the law. A member of the Secretariat must make it clear that there were questions that, as an international civil servant, he had no right to answer and these included questions relating to his UN work and to the activities of the UN itself, as well as the political or religious views or past relationships of himself or of his colleagues. This meant, in fact, that only nonpolitical criminal activities were a legitimate subject for investigation by the FBI. In November 1953, making use of the opportunity provided by a remark to the McCarran Subcommittee by FBI Director J. Edgar Hoover that the extraterritorial status of international organizations in the United States made it impossible for the FBI to operate on their premises, Hammarskjold asked for the immediate removal of the FBI from UN Headquarters.”

But there was still the matter of the American staff members that had been dismissed or terminated by Trygve Lie because they plead the Fifth Amendment when investigated. Hammarskjold wasn’t able to make everyone happy with his decisions, but I feel he was trying to avoid giving the McCarthy crowd any kind of foothold for future harassment.

“During the summer a U.S. federal grand jury, the International Organizations Employees Loyalty Board, and two U.S. Senate Subcommittees continued to investigate present and former American Secretariat members. On August 21 the Administration Tribunal, the Secretariat’s highest court of appeal, rendered judgments in twenty-one cases of American staff members who had appealed against their dismissal or termination by Lie for having invoked the Fifth Amendment during investigations by the U.S. authorities. The Tribunal found in favor of eleven of the applicants, awarding compensation to seven of them and ordering the reinstatement of four. Hammarskjold declined to reinstate the four on the grounds that it was “inadvisable from the points of view which it is my duty to take into consideration,” whereupon they too were awarded compensation. His decision simultaneously dismayed a large part of the UN staff, who believed that their colleagues should have been reinstated, and enraged the anti-UN faction in the United States led by Senators Joseph McCarthy and William E. Jenner, who saw it as a recommendation for the payment of some $189,000 in compensation to traitors. The attitude of the senators was later reflected in the U.S. opposition in the General Assembly to Hammarskjold’s request for an appropriation to pay the compensation awards.”

For further context, you can read the speeches Hammarskjold gave to the staff in New York and Geneva in May of 1953 on the Dag Hammarskjold Library website.