Just recently, I purchased the book WHO KILLED HAMMARSKJOLD?: THE UN, THE COLD WAR AND WHITE SUPREMACY IN AFRICA, written by Susan Williams, a senior research fellow at the Institute of Commonwealth Studies, University of London, and reading it has left me disturbed. It was a shock to open the book to the back page and see, for the very first time, the drawing of the wreckage plan of the Albertina. There was Vlado’s body, indicated by a circled “B 7”, not far from Dag Hammarskjold (“B 8”) and Sgt. Harold Julien (“B 16” – the only survivor of the crash, who died six days later). This book is an incredible help for my research, and I want to thank Williams for writing it. I hope the U.N. does not ignore the evidence she has presented in her book – Dag Hammarskjold’s death was not an accident, and there should be a new inquiry. Like so many good men that dared to live out their philosophy on this planet, he had to pay for it with his life.
From the family photo archive, here is Vlado’s body being delivered to Geneva on the Pan Am DC8 that carried the body of Hammarskjold and the other 14 victims, the first stop of many around the world. The UN flag that drapes his coffin was later given to Madame Fabry-Palka and her daughter Olga, and is now in our home. (click images to enlarge) 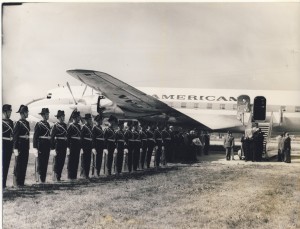 In this photo, Madame Fabry-Palka is consoled by a UN staff member as Olga Fabry (Vlado’s only sibling) stands nearby. I wish I knew who the other people in the photograph were – especially the man with the reflective glasses and the baton at the foot of the stairs. 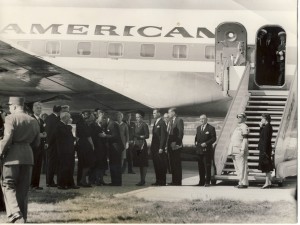 Vlado is buried in the Cimetière du Petit-Saconnex in Geneva, next to his father – they died within 9 months of each other. Madame Olga Fabry-Palka died in 1974, and is buried there with them, also. Whenever I am in Geneva, I pay my respects to this good family, and thank them for their example of courage. 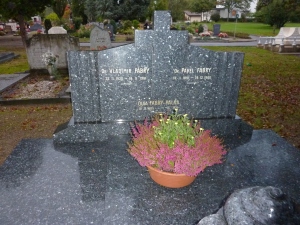