This photocopied document was found among the testimonies of many different refugees that Dr. Pavel Fabry represented: 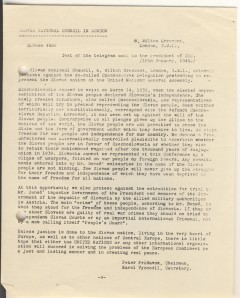 Text of the telegram sent to the President of UNO.
10th January, 1946

The Slovak National Council, 8, Wilton Crescent, London, S.W.1., solemnly protests against the so-called Czechoslovak Delegation pretending to represent the Slovak nation at the United Nations General Assembly.
Czechoslovakia ceased to exist on March 14, 1939, when the elected representatives of the Slovak people declared Slovakia’s independence. The newly created structure, also called Czechoslovakia, the representatives of which will try to pretend representing the Slovak people, does neither territorially nor constitutionally, correspond with the defunct Czechoslovak Republic. Moreover, it has been set up against the will of the Slovak people. Contrarywise to all pledges given by the Allies to the nations of the world, the Slovak people are not permitted to [choose] the State and the form of government under which they desire to live. We claim freedom for our people and independence for our country. We demand a free, unfettered and internationally controlled plebiscite to ascertain whether the Slovak people are in favor of Czechoslovakia or whether they wish to retain their nationhood regained after one thousand years of subjugation in 1939. Slovakia cannot be represented at this Conference by a clique of usurpers, foisted on our people by foreign powers. Any commitments entered into by Mr. Benes’ emissaries in the name of the Slovak people are not binding. The Slovak people will never give up the struggle for their freedom and independence of which they have been deprived in the name of freedom for all nations.
At this opportunity we also protest against the extradition for trial to Mr. Benes‘ impostor Government of the President and members of the Government of the Republic of Slovakia by the Allied military authorities in Austria. The main “crime” of these people, according to Mr. Benes, is that they stood for the freedom and independence of Slovakia. If they or any other Slovaks are guilty of real war crimes they should be tried by independent Slovak Courts or by an impartial international Tribunal, not by a mob calling itself “People’s Court”.
Unless justice is done to the Slovak nation, living in the very heart of Europe, as well as to other nations of Central Europe, there is little hope that either the UNITED NATIONS or any other international organization will succeed in solving the problems of the European Continent in a just and lasting manner and in creating real peace.
Peter Pridavok, Chairman
Karol Vycnodil, Secretary