1948 was a very difficult year for the Fabry family, which was the time of the Communist coup d’état in Czechoslovakia. Vlado was far away from Bratislava, working in former Dutch Batavia, now Jakarta, for the United Nations Committee of Good Offices on the Indonesian Question, but his concern for his family stayed close. Vlado was devoted to the ideals of the United Nations, and making the world more peaceful, but he was torn by a greater devotion to his family. His position with the UN made many things possible for himself and his family, who were all political refugees, stateless, and fearful of being deported at any time, so it was not so easy for Vlado to ask for a post nearer his family, without sounding like he cared more about his family than his work. From a letter dated October 21, 1948, frustrated in Indonesia, Vlado writes to a member of the UN asking to be assigned to Palestine:

“Well, that would be all very nice as a position in a showdown if I would be alone and could make it without having to worry what would happen to my family if something goes wrong. As things are, I have rather to be concerned about everything, and address myself to you for help. With the indication not to appear in Paris for some time I have to rely on you and Boka, and hope that this year you will have more luck than last. I really can not work too much longer in this atmosphere of uncertainty in which I am now, without letting down either my work or my nerves, and I have to have my family sheltered somewhere, preferably in Europe, and be reasonably near to it for some time – 3 or 4 months – to give them the initial support they need. An assignment to Palestine as your assistant – which in my opinion should be for [Ivan] Kerno extremely simple, as all he has to do is to recall Kingstone and assign me instead – would be for me wonderful – it would keep me near my folks, would give me the opportunity to get a working acquaintance with the people who would decide on my transfer to trusteeship – I just learned that there were two resignations in Wishoff’s section lately – and would give me the immense advantage to work with somebody I like and esteem, and to be near to a friend again. So I pin my hopes on it.”

Vlado would remain in Jakarta until May 1951, as Assistant Secretary and adviser to Principal Secretary of United Nations Commission for Indonesia, but he wasn’t entirely “stuck” there – he managed to get away to Europe (most likely, to see his family) around the end of October/beginning of November 1948, with plans to visit Hong Kong and South China on his way there. Here is a letter from H.J. Timperely, sent from the Hotel des Indes and dated October 29, 1948, to His Excellency Dr. T.V. Soong in China, introducing Dr. Vladimir Fabry, and giving Timperely’s insights on the situation in Indonesia: 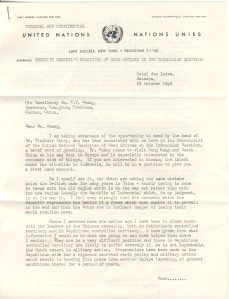 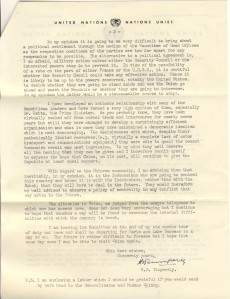 On March 14, 1950, referencing mutual friend and colleague Sarvepalli Radhakrishnan, Vlado wrote to His Excellency Mr. Raghavan, Ambassador to the Republic of India in Prague, asking if he would be interested in buying a set of crystal tableware to cover his sister’s school tuition: