In my first post, I uploaded a video from Youtube by HammarskjoldProject, showing the final images of Dag Hammarskjöld and the UN members boarding the plane that would crash near Ndola, September 18, 1961. I’ve spent a good deal of time looking at images of Vlado and his most distinctive features are his ears, his broad smile and his high cheekbones, which is how I recognized him in the video, climbing the stairs for the last time.
Here is one of the last known photos of Vlado and Hammarskjöld, taken by the Daily Express, which was sent with a condolence letter by Mary Sheila Dean Marshall from Ibadan, Nigeria. The photo is of the back of his head, but the ears are unmistakably Vlado’s. The letter, and the obituary of Marshall that galvanized me to begin my research about Vlado, is posted here. 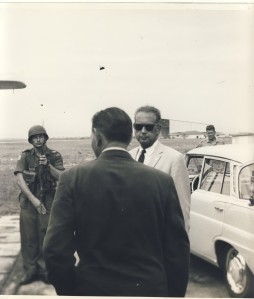 **Update: This photo was cropped. The expanded photo and more is included in later posts, found here and here.

3 thoughts on “Last Photo of Vlado Fabry and Dag Hammarskjöld”