Many of the postcards in the Fabry collection are of typical images from Switzerland, but there are a few that stand out in contrast.
(click images to enlarge) 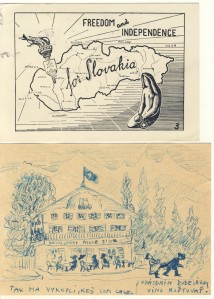 “Freedom and Independence for Slovakia” was sent from Munich on April 12, 1960, and signed by someone named “Tiso”, but not Jozef Tiso.
The second card, drawn by Dr. Pavel Fabry and written in Slovak, was sent from Aigle, in the Swiss canton of Vaud (a place I am very fond of) on May 1, 1949. I tried to translate this, but was not successful – something about being kicked out of place (a woman appears to be kicking the backside of a man in the drawing, too).
I recognized this image immediately – Lenin’s Tomb and the Kremlin:

The postcard is written in German and dated January 1, 1949, with stamps and cancels from both Denmark and Czechoslovakia – what makes this one even more interesting is that the card is from the Soviet Union, written in Cyrillic. 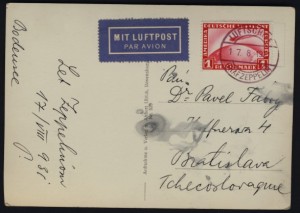 In an entirely different box of papers I found the original ticket for the Zeppelin ride, dated August 17, 1931, with the name “Wladimir Fabry”. 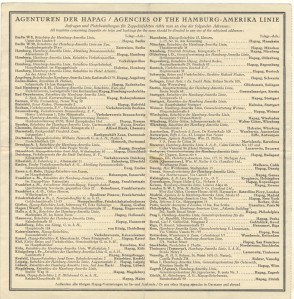 Lucky for him it wasn’t a ticket on the Hindenburg.