Remember Patrice Lumumba and why he was murdered! Stand up for black lives, end the system of slavery and cruelty!

Men and women of the Congo,

Victorious fighters for independence, today victorious, I greet you in the name of the Congolese Government. All of you, my friends, who have fought tirelessly at our sides, I ask you to make this June 30, 1960, an illustrious date that you will keep indelibly engraved in your hearts, a date of significance of which you will teach to your children, so that they will make known to their sons and to their grandchildren the glorious history of our fight for liberty.

For this independence of the Congo, even as it is celebrated today with Belgium, a friendly country with whom we deal as equal to equal, no Congolese worthy of the name will ever be able to forget that is was by fighting that it has been won [applause], a day-to-day fight, an ardent and idealistic fight, a fight in which we were spared neither privation nor suffering, and for which we gave our strength and our blood.

We are proud of this struggle, of tears, of fire, and of blood, to the depths of our being, for it was a noble and just struggle, and indispensable to put an end to the humiliating slavery which was imposed upon us by force.

This was our fate for eighty years of a colonial regime; our wounds are too fresh and too painful still for us to drive them from our memory. We have known harassing work, exacted in exchange for salaries which did not permit us to eat enough to drive away hunger, or to clothe ourselves, or to house ourselves decently, or to raise our children as creatures dear to us.

We have known ironies, insults, blows that we endured morning, noon, and evening, because we are Negroes. Who will forget that to a black one said “tu”, certainly not as to a friend, but because the more honorable “vous” was reserved for whites alone?

We have seen our lands seized in the name of allegedly legal laws which in fact recognized only that might is right.

We have seen that the law was not the same for a white and for a black, accommodating for the first, cruel and inhuman for the other.

We have witnessed atrocious sufferings of those condemned for their political opinions or religious beliefs; exiled in their own country, their fate truly worse than death itself.

We have seen that in the towns there were magnificent houses for the whites and crumbling shanties for the blacks, that a black was not admitted in the motion-picture houses, in the restaurants, in the stores of the Europeans; that a black traveled in the holds, at the feet of the whites in their luxury cabins.

Who will ever forget the massacres where so many of our brothers perished, the cells into which those who refused to submit to a regime of oppression and exploitation were thrown [applause]?

All that, my brothers, we have endured.

But we, whom the vote of your elected representatives have given the right to direct our dear country, we who have suffered in our body and in our heart from colonial oppression, we tell you very loud, all that is henceforth ended.

The Republic of the Congo has been proclaimed, and our country is now in the hands of its own children.

Together, my brothers, my sisters, we are going to begin a new struggle, a sublime struggle, which will lead our country to peace, prosperity, and greatness.

Together, we are going to establish social justice and make sure everyone has just remuneration for his labor [applause].

We are going to show the world what the black man can do when he works in freedom, and we are going to make of the Congo the center of the sun’s radiance for all of Africa.

We are going to keep watch over the lands of our country so that they truly profit her children. We are going to restore ancient laws and make new ones which will be just and noble.

We are going to put an end to suppression of free thought and see to it that all our citizens enjoy to the full the fundamental liberties foreseen in the Declaration of the Rights of Man [applause].

We are going to do away with all discrimination of every variety and assure for each and all the position to which human dignity, work, and dedication entitles him.

We are going to rule not by the peace of guns and bayonets but by a peace of the heart and the will [applause].

And for all that, dear fellow countrymen, be sure that we will count not only on our enormous strength and immense riches but on the assistance of numerous foreign countries whose collaboration we will accept if it is offered freely and with no attempt to impose on us an alien culture of no matter what nature [applause].

In this domain, Belgium, at last accepting the flow of history, has not tried to oppose our independence and is ready to give us their aid and their friendship, and a treaty has just been signed between our two countries, equal and independent. On our side, while we stay vigilant, we shall respect our obligations, given freely.

Thus, in the interior and the exterior, the new Congo, our dear Republic that my government will create, will be a rich, free, and prosperous country. But so that we will reach this aim without delay, I ask all of you, legislators and citizens, to help me with all your strength.

I ask all of you to forget your tribal quarrels. They exhaust us. They risk making us despised abroad.

I ask the parliamentary minority to help my Government through a constructive opposition and to limit themselves strictly to legal and democratic channels.

I ask all of you not to shrink before any sacrifice in order to achieve the success of our huge undertaking.

In conclusion, I ask you unconditionally to respect the life and the property of your fellow citizens and of foreigners living in our country. If the conduct of these foreigners leaves something to be desired, our justice will be prompt in expelling them from the territory of the Republic; if, on the contrary, their conduct is good, they must be left in peace, for they also are working for our country’s prosperity.

The Congo’s independence marks a decisive step towards the liberation of the entire African continent [applause].

Sire, Excellencies, Mesdames, Messieurs, my dear fellow countrymen, my brothers of race, my brothers of struggle– this is what I wanted to tell you in the name of the Government on this magnificent day of our complete independence.

Our government, strong, national, popular, will be the health of our country.

I call on all Congolese citizens, men, women and children, to set themselves resolutely to the task of creating a prosperous national economy which will assure our economic independence.

Glory to the fighters for national liberation!

The four-leaf clover – Štvorlístok in Slovak – was the symbol of the Fabry family, and finding them and tucking them into books is something our family still does. Here is the first one of the year, a gift found by my husband, my biggest fan and number one supporter. 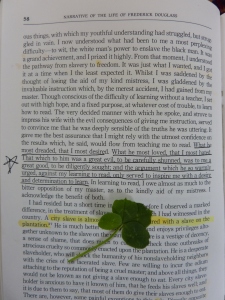 I’ve pressed it in my favorite book, “Narrative of the Life of Frederick Douglass” – a man who shares first place with Socrates on my list of heroes. Here is an observation by Douglass that truly inspires me:

“Very soon after I went to live with Mr. and Mrs. Auld, she very kindly commenced to teach me the A, B, C. After I had learned this, she assisted me in learning to spell words of three and four letters. Just at this point of my progress, Mr. Auld found out what was going on, and at once forbade Mrs. Auld to instruct me further, he said, “If you give a nigger an inch, he will take an ell. A nigger should know nothing but to obey his master–to do as he is told to do. Learning would spoil the best nigger in the world. Now,” said he, “if you teach that nigger (speaking of myself) how to read, there would be no keeping him. It would forever unfit him to be a slave. He would at once become unmanageable, and of no value to his master. As to himself, it could do him no good, but a great deal of harm. It would make him discontented and unhappy.” These words sank deep into my heart, stirred up sentiments within that lay slumbering, and called into existence an entirely new train of thought. It was a new and special revelation, explaining dark and mysterious things, with which my youthful understanding had struggled, but struggled in vain. I now understood what had been to me a most perplexing difficulty–to wit, the white man’s power to enslave the black man. It was a grand achievement, and I prized it highly. From that moment, I understood the pathway from slavery to freedom. It was just what I wanted, and I got it at a time when I the least expected it. Whilst I was saddened by the thought of losing the aid of my kind mistress, I was gladdened by the invaluable instruction which, by the merest accident, I had gained from my master. Though conscious of the difficulty of learning without a teacher, I set out with high hope, and a fixed purpose, at whatever cost of trouble, to learn how to read. The very decided manner with which he spoke, and strove to impress his wife with the evil consequences of giving me instruction, served to convince me that he was deeply sensible of the truths he was uttering. It gave me the best assurance that I might rely with the utmost confidence on the results which, he said, would flow from teaching me to read. What he most dreaded, that I most desired. What he most loved, that I most hated. That which to him was a great evil, to be carefully shunned, was to me a great good, to be diligently sought; and the argument which he so warmly urged, against my learning to read, only served to inspire me with a desire and determination to learn. In learning to read, I owe almost as much to the bitter opposition of my master, as to the kindly aid of my mistress. I acknowledge the benefit of both.”